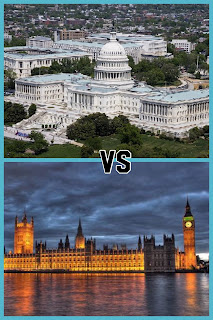 In a Parliamentary system, the "prime (first) minister" is chosen by his/her own party, not the population. Therefore a Prime Minister is always an insider, a professional party member, and the possibility of an outsider like Donald Trump coming in to "shake things up" in countries like Australia or England is virtually nil.

The party can even oust a sitting Prime Minister and switch the country's main leader at will, without any consent of the people, as happened from 2010-2015 when Australia had 5 different prime ministers in 5 years! Though Democrats would love to override the will of the people, ousting Donald Trump as President will never happen.

Impeachment is possible in the US by vote of both houses of Congress, yet no President has even been removed from office. The House of Representatives impeached 2 presidents, Andrew Johnson and Bill Clinton, but the Senate acquitted them both. The House of Representatives started an impeachment process against Richard Nixon but it was never completed. Nixon resigned in 1974, becoming the only President to ever remove himself from office.


The US system of government was carefully crafted by the principally Christian founders who referred to the Bible for a template of governance. They saw 3 distinct branches with separate powers that were able to hold each other on "checks and balance".


The only Biblical check and balance they omitted to enshrine was the authority of the religious branch (Prophets, later Sanhedrin and latest Church), which is the only body entirely independent of and impervious to politicians. Despite their broadmindedness, the Founding Fathers were victims of their time; they reacted to the circumstances of the context they lived in. Many early European immigrants to America were Christians from smaller churches fleeing persecution, oppression and control by a) the Catholic Church on the continent and b) the Anglican Church in England. Understandably they had a bias against established religion, but not Christian religion itself. They could in no way foresee the political bias against all Christian churches today. It would have been unfathomable to them!


Here is one lesson: the founding fathers were educated in history, philosophy and theology, yet they should not have neglected to recognize and protect the role of the Church. If ever all 3 branches (or 2 for a Parliamentarian system) become corrupt, then only the Church is left to educate the public and correct the immorality of the "powers that be" (PTB). Even when one branch is corrupt, such as seen in America by "judicial activism" or judges making laws without Congress or the people's consent, the main institution that stands by to oppose such corruption by informing  voters is the Church. Few politicians want to risk their careers by rocking the boat. They are all in the same "club" and must scratch each other's backs, unless they are an outsider like Donald Trump.


This explains why the Left introduces legislation against the Church every chance they get, on a yearly basis in Australia, because despite our imperfections, we are not taxed and cannot be cajoled into giving up our moral standards by political bribes. We cannot be bribed by government funding like schools and universities can, or by regulatory licenses like journalists and TV stations are. We (most of us ministers) take nothing from government and we give society far greater value in terms of social stability, personal morality, Sunday school, sports chaplaincy, youth counselling, marital counselling, social work and poverty alleviation (to name only a few benefits of Christianity). The Left hates us because we are the only major institution which they have not taken over.

Every citizen, especially Christians, must understand why all liberties depend on religious liberty. Defend religious freedom from Marxist forces by prayer AND participation in politics! If you like this leave us a comment!